Finding Ways to Give Back 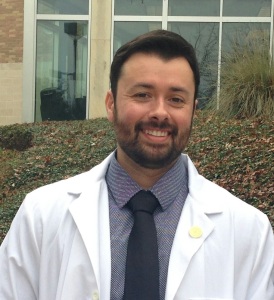 Daniel Cardenas’ father always told him to give back to the community and to those who are less fortunate. Daniel graduated from the University of Texas in Austin (UT) in 2003 without having a clear idea of what he wanted to do with his life. After being laid off from an accounting firm in 2013, Daniel decided he was ready to practice what his father preached.

“When I got laid off, I didn’t have marketable skills other than basic office skills,” Daniel said. He decided that a career in healthcare would give him job security and a good paycheck, and would also allow him to interact with ill people who needed his help. He decided to pursue a career in nursing and enrolled full-time in a rigorous course load at Austin Community College (ACC).

Daniel worked at a drug and alcohol rehabilitation facility while he was in nursing school, but he struggled with being a full-time student and paying his bills. One of Daniel’s classmates told him about the Workforce Investment Act (WIA) program, which is administered by Workforce Solutions Capital Area (Workforce Solutions). The WIA program pays for occupational training costs for income-qualifying adults and youth.

“It’s a completely different story,” Daniel said of his path to a career in nursing. “I’m older and have more perspective. I was going to nursing school with a purpose, with an end goal in mind, not like at UT. I had a much different mindset and a much harder work ethic. I cut back my hours at the rehabilitation facility because I wanted to focus the majority of my time on school.”

Through the WIA program, Daniel participated in a basic computer literacy course and a job interview preparation course. The WIA grant paid for Daniel’s tuition as well as for supplies on the nursing program syllabus, such as textbooks, scrubs, stethoscopes and shoes. The grant also paid for weekly gas cards so that Daniel could travel to his classes and his clinical rotations at local hospitals.

During his last semester at ACC, Daniel participated in a class that prepared students for job placement. Daniel prepared his resume and honed his interview skills through this class, and he received several job offers at local hospitals. “I was lucky enough to observe an operating room during nursing school,” Daniel said. “I knew right away that surgery was what I wanted to do.” In January 2015, Daniel accepted a position as a circulating nurse at St. David’s South Austin Medical Center and works in the operating room (“O.R.”) during surgeries.

“It’s a very fast-paced job,” Daniel said. “The circulating nurses are like the offensive coordinators of the operating room. We oversee everything, and we conduct safety checks in the O.R. It comes down to us to make sure everything is correct and as safe as possible. Nursing school taught us to treat all equally and compassionately. Act as if this patient is a family member,” he said.

Daniel said the most important factor to his success was having a big support group; his family and a good study partner were key to his success. Daniel encourages others to use the WIA program to pursue their interests. “You get out of the training program what you put into it, that’s the bottom line. Programs like WIA reward you for your hard work,” Daniel said. “I felt good when I walked across the stage at UT, but I felt even better when I walked across the stage at ACC.”

About the WIA Program

The Workforce Investment Act (WIA) – now the Workforce Innovation and Opportunity Act (WIOA) – program is a no-cost employment program designed to give job seekers the support and/or skills training they need to find a job. Specifically, WIOA can provide:

For more information about the program and eligibility, please visit www.wfscapitalarea.com.